You may have heard of ‘bloat’ in dogs. Here’s what you need to know. 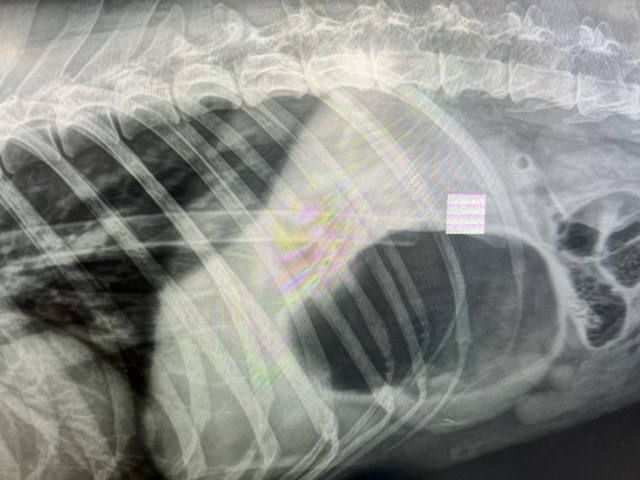 Gastric Dilation and Volvulus is the medical name for a condition you may know as “Bloat”. It is a syndrome of dogs in which the stomach dilates and twists around itself.  It is mainly seen in large or deep-chested breeds, including some of hunting breeds such as;

The exact reason it happens is unknown. The latest research leads us to suspect that it is related to the way the dog’s stomach digests food. Normally when digesting food, the stomach contracts in a very orderly and systematic fashion. With bloat, it is thought that the contractions occur in a more random way and the pylorus (the area leading to the small intestine) spasms shut, stopping food from moving into the intestine.

Large amounts of air are also swallowed, and with the pyloris closed, the air cannot pass through and out of the stomach. In many cases, the stomach then floats in the abdomen and twists on itself. Think about a hammock hanging with its lowest point in the middle, this is how the stomach normally orients itself. But, if you were to flip it upside down, but the bend in an upward direction, this is what happens with the torsion. Frequently rapid overeating and then exercising shortly after eating is a contributing factor. Some foods also swell when they mix with moisture (like stomach juices). It can occur at any age but is more common in middle-aged to older dogs.

What are the signs of bloat?

Dogs with bloat usually display non-productive retching or vomiting, excessive salivation and progressive enlargement of their abdomen which can start to feel like a tight balloon. They are usually weak and depressed. Without treatment this condition can lead to death within a few hours.

Can bloat be fatal?

Bloat is potentially fatal for a number of reasons. As the stomach enlarges and twists, the blood supply to the stomach is cut off which causes the tissue to begin to die. This leads to the release of harmful toxins around the body. The expanding stomach also puts pressure on the chest and lungs which reduces the animal’s ability to breath, so the body becomes deprived of oxygen. The enlarged stomach also puts pressure on the body’s major blood vessels (aorta and vena cava) resulting in disruptions of blood flow to various other body organs.

How is bloat diagnosed?

Diagnosis is performed by general examination and possibly taking x-rays of the abdomen. This reveals a grossly enlarged stomach full of air. Sometimes the twist in the stomach can also be seen on the radiograph.

As mentioned, Bloat is a very serious condition and the sooner medical treatment is begun the greater the dog’s chances of survival. Treatment involves placing the dog on intravenous fluids to stabilise the patient and counteract shock.  Blood tests will provide information on the status of abdominal organs, electrolyte imbalances and other parameters that can provide information around the likelihood of survival. Decompression of the stomach is then attempted by anaesthetising passing a long tube through the mouth into the stomach. In many cases, decompression is not possible using this method, but if decompression is achieved the patient is better stabilised prior to surgical correction of the problem. Surgery must then be performed on the animal to decompress (if not done prior) and untwist the stomach. The stomach is then stitched to the side of the abdominal wall permanently (Termed gastroplexy) so it is held firmly in place and cannot twist again. Sometimes the stomach only fills up with air and does not twist on itself. These dogs still need surgery to secure the stomach position and prevent it from twisting in the future. Without the surgery, bloat has an 80 per cent chance of recurrence compared to 3-5 percent after surgery.  In some cases when the blood supply to the stomach has been cut off for too long, the stomach will look very blue or black in surgery. These dogs will not survive and the best thing is to euthanise them at that time.

What can be done if bloat is diagnosed?

Most dogs suffering from bloat and that successfully undergo surgery have a 55-70% chance of recovery.  It is also important these animals receive intense monitoring for at least 36 hours after the surgery. A common problem post-surgery is heart arrhythmias – where the heart beats irregularly. This is due to the heart receiving reduced oxygen during the bloating episode, causing parts of the heart muscle to be damaged, and also due to some of the toxins released after the stomach position is corrected. The main toxin is potassium that is released from the dying cells, this can then cause the heart irregularities and unfortunately sometimes stop it all together.

Can bloat be avoided?

Some vets will offer preventative surgery called gastroplexy in at risk breeds when they are younger, perhaps at the time of desexing. Whilst this procedure will not prevent bloat, it will prevent the torsion, buying you time to get to the vets.

Some ways to reduce the risks include pre-soaking food to avoid it swelling in the stomach, not exercising after a meal, feeding smaller meals more often, and raising feeding bowls have all been suggested.